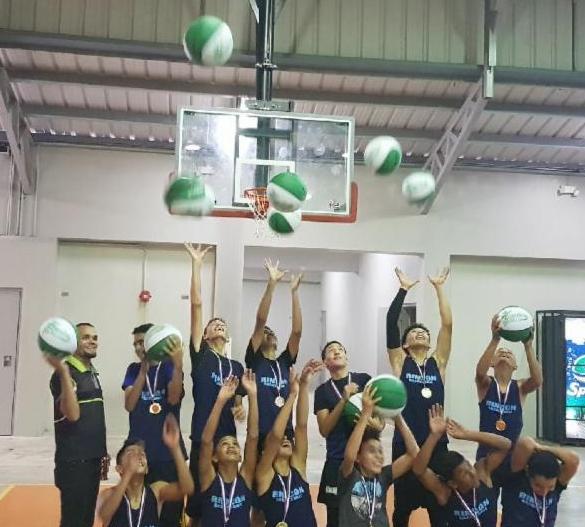 In our last e-Newsletter we shared with you the vision of helping teens across the ocean. Today we are pleased to announce that this past April and May, the two saddest months of the year for us, we found ourselves witnessing the profound impact that JSRF is having on some of our teens. Last September Hurricane Maria devastated most of Puerto Rico, but thanks to YOU, together we helped over 20 teens in a small way in the small town of Rincon, Puerto Rico. Rincon is located on the northwest side of a beautiful Island only 100 miles long. In this small town mainly known for surfing, we sponsored an entire basketball team and also purchased a complete set of percussion instruments for the Rincon Concert Band.

On April 22nd, three days before Jeremy’s 9th anniversary, we had an opportunity to sit with a group of parents, teens, and coaches to hear the stories of survival, resilience, and determination. We listened to how the teens tried relentlessly to be the the best they can be despite the hardship they endured during the months that followed the hurricane.

As the months went by, coaches and parents desperately scrambled to find a place for their kids to play basketball since most courts were ruined from water damage. Parents instinctively knew that they needed to get the kids playing as soon as possible because believe it or not, they feared the worst. What would happen to these teens with so much time on their hands and nothing to keep them occupied? Remember, schools were closed for nearly five months. Just navigating through town was a challenge depending on where you lived. Slowly but surely they found a school with restored electricity, running water, and limited damage to the field house. This became a place not only for practice, but a safe place where they would share their personal stories of survival, share food, and even a place to shower as most were still waiting for water and electricity to be restored in their homes. What struck me the most was the deep bond and friendships that were formed between the teens, the families, and even the coaches.

We were so humbled that all 13 families came out on a Sunday afternoon to meet us, give us a warm welcome, share their stories and also give us a demo of how talented these boys are on the basketball courts.

And so in April, our small contribution made big waves in this little surf town … Team Rincon Basketball became champions in their tournament league!!

They are one proud and determined group of kids eager to turn tragedy into success and with the help of JSRF … Experience Hope.

As if that wasn’t enough to fill your heart, I had the opportunity to meet the mayor of Rincon and sponsor teens in a music program that was strictly created for under-resourced adolescents. I was fortunate to be present when the instruments that JSRF purchased for the Rincon Concert Band were delivered and to hear them play on their brand new drums. Listen in.

I just learned last week that the Rincon Concert Band is one of five bands invited to play at Carnegie Hall, on July 2, 2019, at an event titled “Puerto Rico Para el Mundo” (“Puerto Rico for the World”). We are keeping our fingers crossed that this will come to fruition and will keep you updated as more details emerge.

Lastly, we are excited to share that we also sponsored teens to Camp Jorn for two full weeks of fun; as well as teens for retreats, football, soccer, basketball and cheerleading! With your support we continue to give teens opportunities they would not otherwise have. Thank you for continuing to believe in and support the Jeremy Stom Remembrance Foundation.